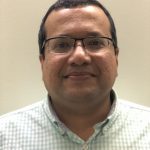 I was trained in biochemistry, molecular biology, cancer biology, and drug discovery during my graduate and postdoctoral fellowships. In my current position at UPDDI since August 2019, my focus is to develop a genetic model of Type 2 Diabetics (T2D) and simulating the disease in organ on a chip model to understand the pathophysiology in humans. T2D is a major health crisis affecting about 10% of the adult population in the US. Thus, there is an urgent need to develop an experimental model that recapitulates the disease condition in humans. For addressing T2D, the major contributory factors that lead to dysregulated metabolic conditions in the liver and pancreas needs to be simulated in an organ on a chip model. So, I am focused on identifying the optimal conditions for maintaining human hepatocytes in two-dimensional (plate model) and three-dimensional (MPS model) system. Further, I envision to recapitulate a metabolic disorder by using molecular drivers and ask clinically relevant questions. I will further evolve the models from human primary cells/tissues to iPSC-derived cells and knock-down of selected genes (SLC16A11) to establish a genetic metabolic disorder in an organ on a chip system. Another area of my interest is on Non-Alcoholic Fatty Liver Disease (NAFLD), which is another metabolic disorder that affects about 25% of the adult population in the US and gradually progress to nonalcoholic steatohepatitis (NASH) and ultimately leads to liver cancer. The free fatty acids formation mechanism is critical for the progression of NAFL to NASH. In a normal liver, lipid droplets formed as triglyceride undergo regulated lipolysis to release fatty acids back into the hepatocyte free fatty acid pool. PNPLA3 is a gene that participates in this lipolytic process, and a single-nucleotide variant of PNPLA3 leads to the accumulation of macro steatosis and is strongly associated with NASH progression, underscoring the importance of generating single nucleotide polymorphism (SNP) in PNPLA3 gene as a model for studying in an MPS model. Therefore, developing a PNPLA3 genetic model will help us to understand the progression NAFLD to NASH and liver cancer in humans.