The drug candidate faces numerous efficacy and safety hurdles before moving forward to clinical testing. Here at the UPDDI we recognize the need for early identification of potential human toxicity and pharmacokinetic issues by creating a unique human liver microphysiological systems  platform for drug testing before implementing preclinical animal testing. This goal is in keeping with the desire of the pharmaceutical industry, academic laboratories and regulators to replace or reduce the use of whole animals in drug development.

Liver exposure is one of the predominant cause of drug attrition during preclinical and clinical testing.   This is due to drug-induced liver injury (DILI) but also by poor pharmacokinetic (PK) properties resulting from extensive metabolism and clearance. 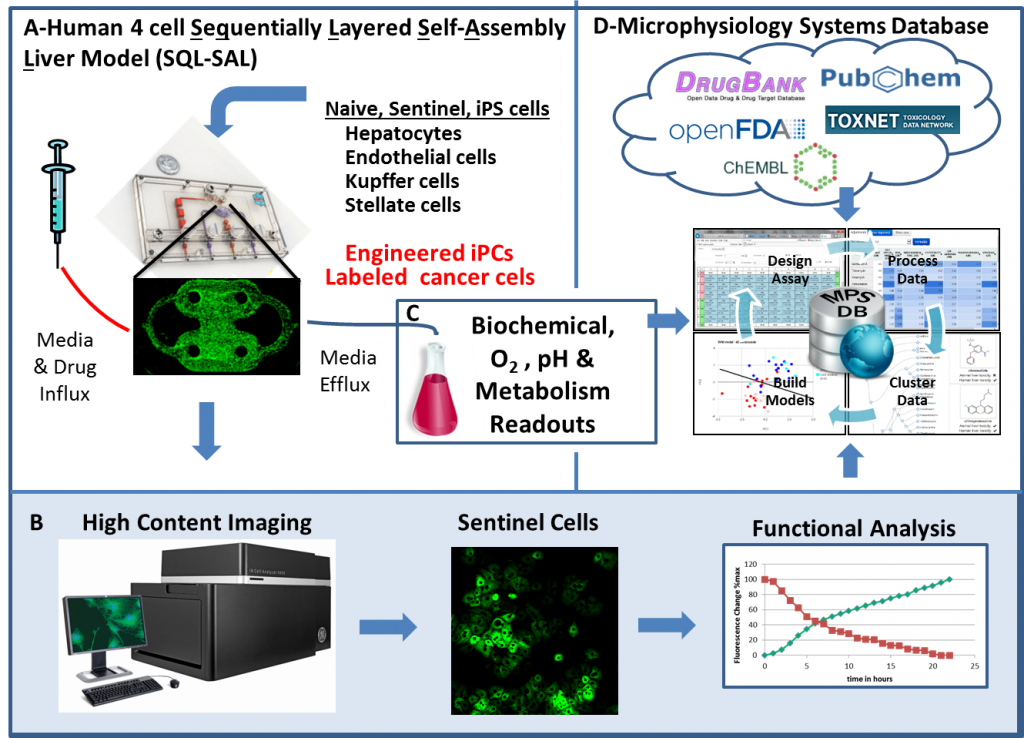 Consequently, the UPDDI is developing human based multi-cellular models to test compounds for the drug researcher which better asses DILI.   We base the liver models on identifying mechanisms or pathways of toxicity (MOT) linked to in vivo hepatocellular injury.  These assays can be an end point assessment in human cell based  moderate throughput screens for SAR testing, or in the microphysiology (MPS), microfluidic 4- human liver cell model which incorporates in life assays and live cell imaging to study toxicity induction over 4 weeks to assess chronic drug exposure.  We offer a LC MS/MS human based microsomal and hepatocyte liver compound clearance assays for intrinsic clearance through a collaboration with the Pharmaceutical Sciences Mass Spectrometry laboratory.  Together with collaborators throughout the United States, the DDI has successfully coupled four human MPS organ models together to create a unique platform for measuring pharmacokinetics.

QSP and In Vitro Toxicology:

The rat is not a small dog and the human is not a big mouse. This often-quoted maxim can be traced to historic animal testing which is at best 70-75% and at worst less than 50% predictive of sometimes rare but serious human drug treatment complications.  Species dependent differences in absorption, distribution, metabolism, excretion (ADME) and genetic heterogeneity of cellular pathway processes accounts for many of these discrepancies. By adapting the QSP iterative approach to integrate in vitro experimentation with improved computational modeling, we are focusing toxicology research at the UPDDI on our nationally recognized ability to develop clinically relevant 3D, microfluidic human based models to better predict human ADME, drug safety and efficacy.